Flood insurance is a hot topic at the moment, the product is in flux. When the  Biggert-Waters Act was signed into law  in 2012, it was met with criticism and concern. This law set to remedy the long standing subsidized flood insurance rates that had subsequently bankrupted FEMA to the tune of 20 BILLION dollars.

However, home owners cried foul and pleaded for mercy as their rates were about to dramtically spike. Stepping in to combat the rate hikes –  the introduction of private insurance. First seen in Florida, private flood insurance began spanning out across the country to include 15 states (as of this time).

Private insurance is written by Lloyd’s of London. Although they offer an alternative, with very competitive rates, my concern would be what happens if a catastrophic storm hits, àla Super Storm Sandy? If a private insurance company goes bankrupt – you could be out of luck in terms of receiving reimbursements.

If FEMA backed insurance accumulates too many losses, they dig into the money bags of the USA government. Whose likely to run out of money first? The entire goal of flood insurance, any insurance, is to make it self-sustaining. For that to happen, the rates must reflect the true risk involved.

President Obama signs into law a Flood Insurance Relief Act.  In March of 2014, after much outcry from the constituents of flood weary states, the government backed down from it’s initial aggressive stance on curbing subsidized flood insurance rates. Essentially this law caps flood insurance premium rate hikes and passes on subsided rates to people buying homes in flood zones.

Flood insurance rates still need to be adjusted to better reflect the true risk of the home in a flood zone. Without it, people will continue to build, buy and live in a flood risk area, exposing the taxpayer to a significant burden. With the ever increasing rise in ocean levels, this is a real concern – for everybody.

The flood insurance game is in a state of constant flux. As sea levels rise and flood events occur more frequently, the problem with flooding and insurance to off-set the damages associted with will continue to morph. See here for an informative article detailing the current state of private flood insurance vs. government backed NFIP flood insurance.

I’m a big, big fan of house elevation for flood mitigation. Your house is protected, your insurance rates drop dramatically, and you move from being a part of the problem to a part of the solution. Without a doubt, it’s much easier said then done. Researchers, economists and lawmakers alike all favor this idea. The problem is implementing this expensive notion on a grand scale. 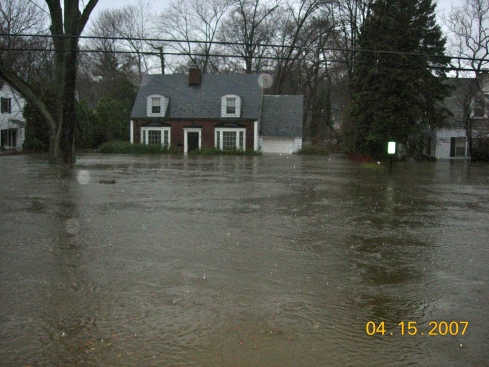 A few hours later … notice the fence and most of the bushes disappear underwater.

If the above house were elevated, the only thing the home owner would need to do is move their car.