WEEK 15: After spending a few days in awe of the flooding that has recently occurred in Boulder, Colorado, I’m back with an update on my flood mitigation project. We’re up to week 15 and taking steps toward seeing a completion date – or – rather making steps this week. 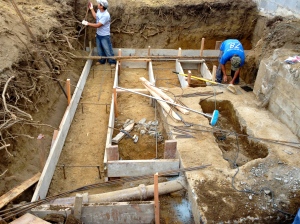 Building the footings for the new front steps

The photo above depicts our crew building the footings for what will become our new front steps. Notice how far down they had to dig? As we live in a climate that experiences a true winter, they had to dig down roughly 4.5 feet to reach below the frost line.

The other item of note in the photo above is our sewer line, the pipe in the foreground. This summer we had it power-blasted to remove tree roots (that had nothing to do with an elevation project, just part of general house maintenance). Prior to this, I can honestly say I never once thought of my sewer pipe. Reading about the recent sewer pipes bursting during the Colorado flood this past week, spewing raw sewage into the street and a few basements of unlucky homeowners, I’m happy to know this nondescript pipe is fine and in good health. 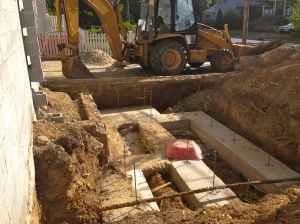 The small pipe is our gas line

The footings required  a site visit and an approval from the building inspector prior to work continuing on the infrastructure for the staircase. Note the slim pipe laying there looking so innocent, like it was not the cause of ANY grief at all.  That little pipe represents an enormous hurdle to any elevation project. I’ve lamented about it several times in earlier posts, our gas line, running from our house to the street.

No visible pipes anymore, buried underneath

The steps are really starting to take shape. I’m still uncertain as to what the final product will look like as the steps were yet another huge point of contention in this elevation project. I’m not going to beat that dead horse again, but suffice it say these are the steps what worked. Feel free to review some earlier posts where I went into great detail about the numerous versions of steps we considered as well as other options available to suit other homes.

This may seem like a lot of photos just for the steps – and they’re not even finished yet! That’s how big of an issue they were to this project. In hindsight or to the casual observer, it’s easy to suggest – what’s the big deal? Suffice it to say creating proportionate and eye-pleasing steps to get into a home that is now almost 5 feet higher than it used to be is easier said than done.